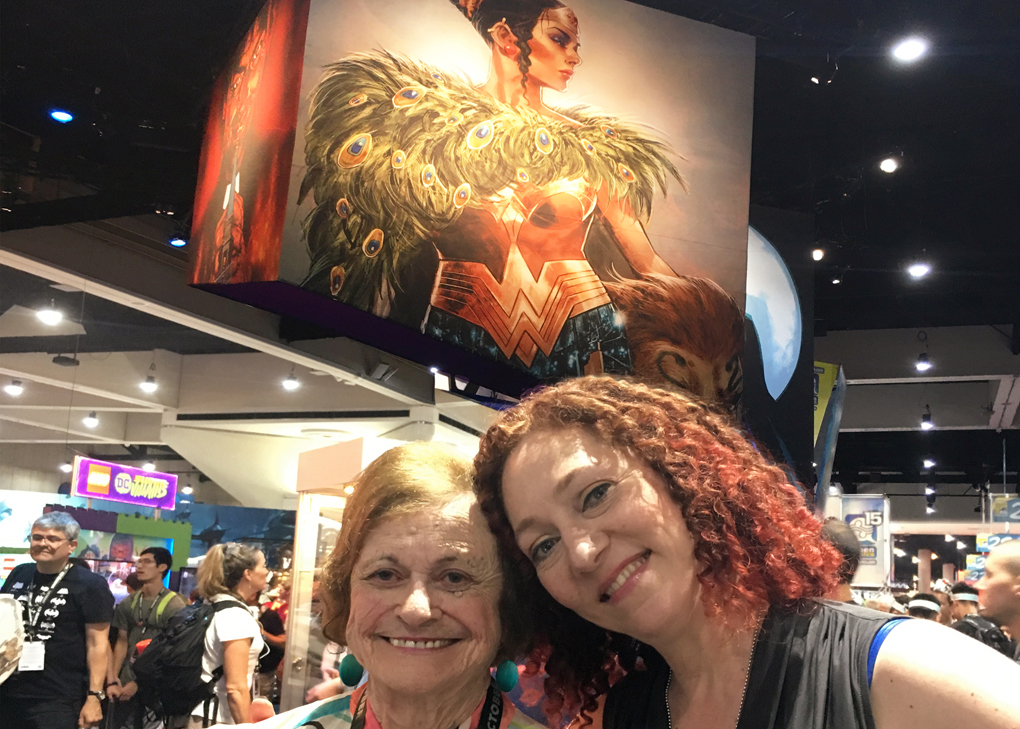 Anina once again joined Bill and Kayre Morrison to kick off the Eisner Award ceremonies—the “Oscars” of comic books. Here they are doing a comedy bit at the top of the show. Anina was liaison for Joye Kelly, the only living Golden Age writer, and first female writer of Wonder Woman! Anina and Paul spent the day with Joye, and even went onto the exhibition floor to show her how popular Wonder Woman has become. Joye had barely followed Wonder Woman after she stopped writing the character in the 40s. Although she was aware of the TV series from the 70s, and had seen the recent film, Joye was overwhelmed by amount of merchandise and representations of the character. Joye's tribute panel was a sensation. Comics historian Mark Evanier called it his most favorite panel that he had ever moderated. The previous evening, Joye was honored with the Bill Finger Award at the Eisner ceremony, in which she received a standing ovation. At the panel on Saturday, she received another standing ovation. At one point, panelist Trina Robbins asked Wonder Woman cosplayers to stand up, in recognition of how much impact the character has had. It was a profound moment. Joye was visibly moved, like Kirk Douglas when his men stand to declare themselves "Spatacus!" If an orchestral score swelled up at that moment, it couldn't have been more emotional.

As Joye took leave of the convention, she passed a cosplayer that was wearing the star-spangled version of Wonder Woman's outfit. Joye prefers the character to be wearing her U.S. flag inspired costume to the Greek warrior outfit with sword and shield. Anina broke through the large paparazzi circle to ask the cosplayer to pose with Joye. The photographers were annoyed that some old lady was ruining their shot, until Anina announced who the woman was. The photographers faces lit up. They went from thinking this was frustratingly inconvenient, to this was a once-in-a-lifetime photo! SEE YOU NEXT YEAR!