A Visit to Tlatelolco 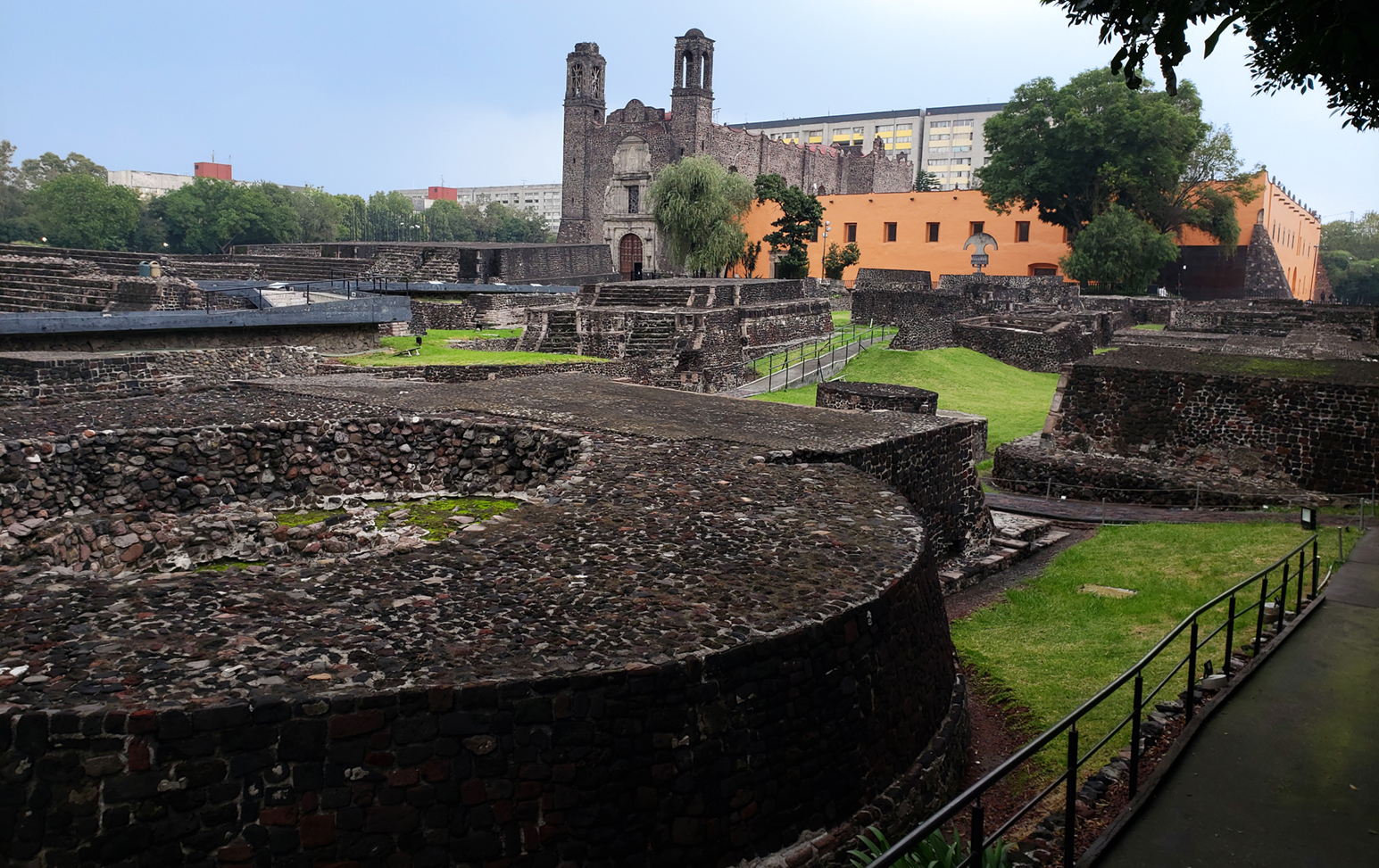 Here are more photos from the research trip to Mexico City that Anina and Paul took in November 2019. On day two, we visited our first Mesoamerican archaeological site! Tlatelolco is historically significant for many reasons. It was located near Tenochtitlan, dates back to the 1300s, and was involved in the events our Aztec Empire series is depicting. Today it sits in the heart of Mexico City, not far from the Templo Mayor site. The header photo above shows the characteristically circular Temple of Ehecatl-Quetzalcoatl, the god of wind—it’s one of four that have been excavated in CDMX. At the time of the Aztec-Spanish War, Tlatelolco was on an island, along with Tenochtitlan, in Lake Texcoco. Modern-day Mexico City is built on top of what used to be a lake and a number of indigenous cities. Above: The stepped structures are what remains of pyramids, built in concentric layers like many temples of the era. Above: The Tlatelolco excavation in Mexico City is on a square called Plaza de las Tres Culturas. It has structures from three major periods of Mexican history: Mesoamerican, Spanish colonial, and independent Mexico.

Below: A map of the Plaza de las Tres Culturas. At the bottom of the map, #1 is the circular temple shown in this blog's header image, the Temple of Ehecatl-Quetzalcoatl. #15 is the church that’s in the background of the photo above, and that Anina and Paul are touching in the photos below. Above: A lot of colonial Spanish structures were built using stones from destroyed indigenous structures. Anina can practically feel all the history these stones have seen. This church was briefly the Colegio de Santa Cruz, the first European college in the Americas. Above: Paul communes with a Tlaloc (rain god) stone, which is mysteriously embedded in the back wall of the Spanish church at Tlatelolco. Above: The blue overlay shows a crude approximation of the carved Tlaloc image, which has been nearly worn away by the elements.

Above: Paul is thrilled despite the rain! Our friends said Tlaloc, the god of rain, was welcoming us. Above: A memorial to the Tlatelolco Massacre of 1968. There were political protests leading up to the 1968 Mexico Olympics, and in this square, government forces shot hundreds of unarmed civilians. This area is also where the final battle and surrender of Mexica (Aztec) leaders took place in 1521. A space of historical resistance.

Below: What trip to Mexico City would be complete without food pix? We concluded our afternoon with some pozole with Paulo and Paula, our guides and companions for the day—at a place called El Pozole de Moctezuma, fittingly enough. Highly recommended! More photos of our trip to Mexico can be seen on our Facebook pages.