Tenochtitlan: Size of a City 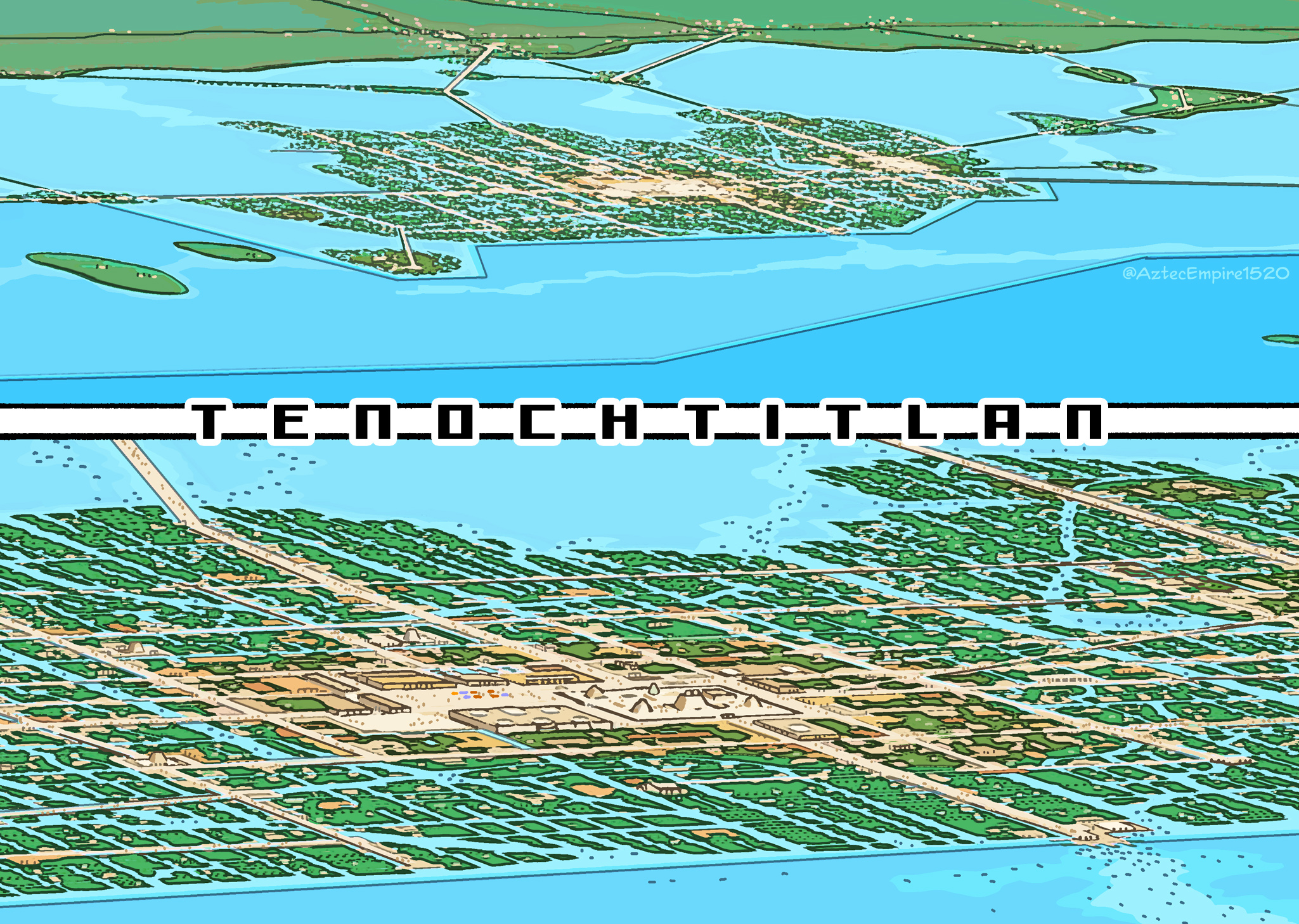 We know much about the physical size of Tenochtitlan. It was a dozen kilometers large, with 20 districts that can be aligned to neighborhoods in contemporary Mexico City. However, the exact population of Tenochtitlan has been a subject of debate for centuries.

Francisco Aguilar, who spent some time in Tenochtitlan before it was destroyed in 1521, counted “over 100,000 houses.” Fray Juan Torquemada, who studied Mexico’s indigenous culture during the late 1500s, wrote that one household could have 4-10 people. Combining these two primary sources, using the median number of family members per house, places the population of the capital at 700,000. That figure is now considered much too high.

During the 20th century, population estimates fluctuated. In 1941, archeologist G.C. Vaillant determined a figure of 300,000 in his magnum opus, Rise and Fall of the Aztec Nation. In 1962, anthropologist Jacques Soustelle apparently used Aguilar and Torquemada’s information to calculate Tenochtitlan’s population at 560,000-700,000 in Daily Life of the Aztecs. In 1964, Jorge Enrique Hardoy’s Pre-Columbian Cities agreed with Vaillant’s estimate of 300,000. In 1979, archeologists Sanders, Parsons, and Santley published The Basin of Mexico: Ecological Processes in the Evolution of a Civilization, suggesting Tenochtitlan had 200,000-300,000 inhabitants. Currently, anthropologist Edward Calnek suggests a figure of around 200,000. Historians Ross Hassig’s and Manuel Aguilar Moreno’s research led them to a similar conclusion. Eduardo Matos Moctezuma, Mexico’s preeminent archeologist who has directed excavations in Mexico City, also declared a figure of 200,000 in his book The Great Temple of the Aztecs: Treasures of Tenochtitlan. Leonardo Lopez Lujan, Senior Researcher in Archaeology at the Museo del Templo Mayor in Mexico City, states 200,000 in his book, Tenochtitlan: Digging for the Past.

A convincing counter-argument to the population estimate of 200,000 is made by Penn State professors Susan Evans and Matthew Restall. Evans compared the square mileage of Manhattan and Tenochtitlan, then the population densities at ground level. She found that Tenochtitlan couldn’t house a population of 200,000 unless people were living in multi-story buildings, which didn’t exist then. Evans estimates Tenochtitlan’s population at 60,000-70,000, a range Restall used in his 2018 book When Montezuma Met Cortes. In the 1987 book Four Thousand Years of Urban Growth: An Historical Census, Tertius Chandler similarly puts the city's size at 80,000 inhabitants.

Regardless of the exact population numbers, the Spaniards had never seen anything like Tenochtitlan. It was several times larger than Madrid, with massive palaces and plazas, zoos and gardens. Plumbing and sewage systems, along with thousands of people assigned to sanitation, kept everything immaculately clean. The scale, orderliness, and elaborate decor, were overwhelming to the Spaniards. They thought they were hallucinating, or under a spell of some sort, when they first arrived at the Aztec capital.

Conquistador Bernal Diaz wrote in his memoirs, "When we gazed upon all this splendor at once, we scarcely knew what to think, and we doubted whether all that we beheld was real. A series of large towns stretched themselves along the banks of the lake, out of which still larger ones rose magnificently above the waters. Innumerable crowds of canoes were plying everywhere around us; at regular distances we continually passed over new bridges, and before us lay the great city of Mexico in all its splendor."