The Gold Sun and the Silver Moon 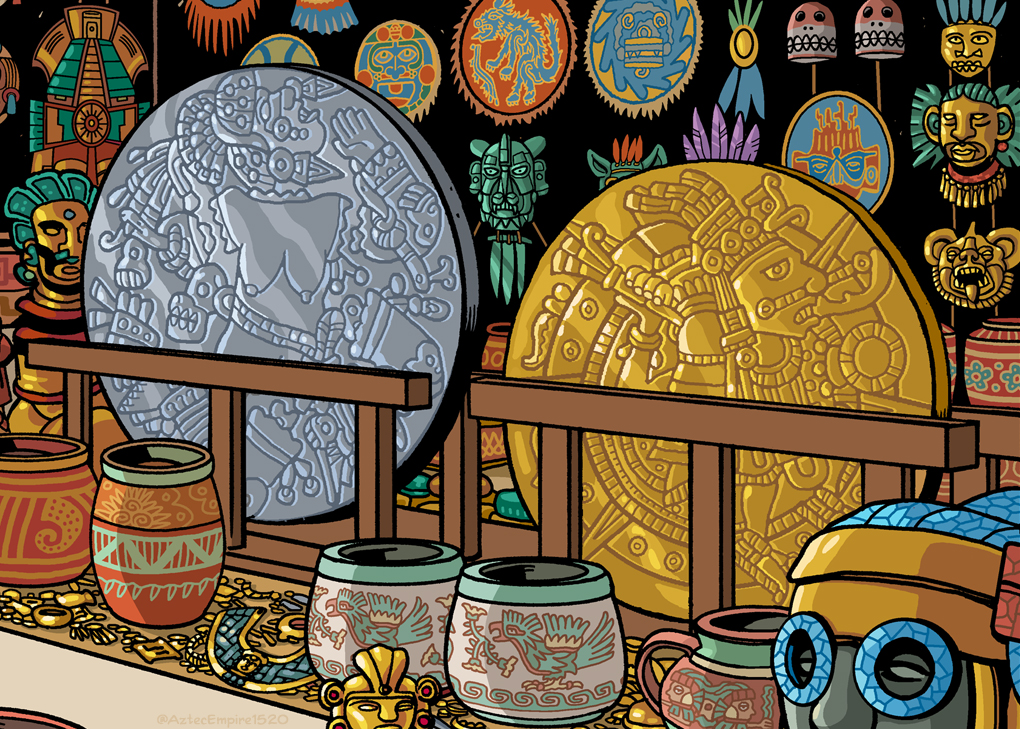 In May 1519, a Mexica ambassador from Tenochtitlan met with people from an unknown land. Mexica diplomatic protocols dictated that gifts be given. To really impress these strangers, the Mexica sent extravagant gifts.

In this collection of gifts were elaborate textiles and featherworks, which the Mexica valued more than gold. The feathered piece known as Motecuhzoma’s headdress (which Motecuhzoma never wore) may have been one such gift. Of course, the Spaniards were more interested in gold, and they ignored the featherworks for the precious metal works. Among the many objects was a gold disc almost six feet across. It was paired with a slightly larger silver disc. Both discs were decorated with elaborate low-relief designs.

Bernal Diaz was an eyewitness to the presentation of these gifts. He described the impressive gold and silver discs:

I based the designs of these discs on representations of the sun deity (Tōnatiuh) and moon deity (Coyolxāuhqui).

“Things Spoken of in Fairy Tales”

In July 1519, Cortés sent these items to his emperor, Charles V, who dispatched them on a traveling exhibit to show off Spain’s newly acquired world and its riches. The spectacular objects were on display in Toledo and Valladolid. Albrecht Dürer, a famous German artist, viewed the exhibit in Brussels during August, 1520. He raved about the show:

I saw the things which have been brought to the King from the new land of gold, a sun all of gold a whole fathom wide, and a moon all of silver of the same size.

Two rooms full of armor of the people there, and all manner of wondrous weapons of theirs, harness and darts, very strange clothing, beds, and all kinds of wonderful objects of human use, much more beautiful to behold than things spoken of in fairy tales. These things were all so precious that they are valued at 100,000 florins.

All the days of my life I have seen nothing that rejoiced my heart so much as these things, for I saw amongst them wonderful works of art, and I marveled at the subtle genius of men in foreign lands. Indeed I know not how to relate all of what I saw there before me.

I do not marvel at gold and precious stones, but I am astonished to see the workmanship excel the substance. I never saw anything whose beauty might so allure the eye of man.

Self-portrait of the German artist Albrecht Dürer, and an anonymous engraving of Spanish court historian Pedro Mártir de Anghiera—the only two witnesses to the 1520 Mexica Cultural Exhibition whose written accounts survive. Dürer was an artistic prodigy. He was master of multiple media, including goldsmithing. If anyone in 16th century Europe could truly appreciate the craft in the artworks on display, it was this guy.

In addition to the elaborately wrought discs, the Mexica gifts included gold jewelry items that were beyond the abilities of European goldsmiths. A naturalistic fish with scales of gold and silver, the metals joined using a casting technique, not soldering. Many of the animal pieces were kinetic, with moveable tongues, wings, or feet.

Although some of the objects sent to Europe still exist, the original collection sent by Cortés is now lost. Clothing and featherworks deteriorated. Wooden swords, arrows, and other weapons were stripped of any gilding and thrown away. Nearly all the gold and silver objects were melted down, and some pieces fell into private hands. Records that could trace the few remaining items back to the original collection are gone.

Motecuhzoma’s headdress, one of a few pieces speculated to be from that original collection, became the property of Archduke Ferdinand of Tyrol, a member of the Habsburg family that ruled Spain and Austria. This is probably how the headdress wound up in Vienna, along with a couple of other Mexica featherworks, but there is no provenance for it. More information about these featherworks can be found at Mexica: A History Podcast.

These are the kinds of featherworks thought to have been among the gifts Cortés sent to his emperor. A hand fan, a warrior's shield, and a ceremonial headdress (with the author of this article).

The Costs of War

What happened to the discs of the sun and the moon, the greatest works of art Dürer and Mártir had ever seen? No one knows. The discs were metal reliefs on wooden forms, similar to what is known as repoussé work. It is likely the metal was stripped from the two frames and melted down.

Charles V could’ve used the money. During the 1520s there were several revolts against the Spanish Crown, a war with Italy, involvement in the Ottoman–Habsburg wars, and the War of the League of Cognac. In the next decades there would be more revolts against Spain, two more wars with Italy, and two with Turkey.

A detail from Battle of Pavis, by a follower of Joachim Patinir. This 1525 battle was part of a five-year conflict between the empire of Charles V and France. One of many conflicts Spain had with various polities in Europe during just the 1520s—all of which needed funding.

The discs were proof that the New World was wealthy. They were considered trophies, but aside from admiration by a few craftsmen and artists, they were not considered works of art worth preserving. After the novelty of the objects wore off, they would’ve been considered valuable only for how many bars of precious metal they could produce.

When the first shipment of treasure arrived from Mexico, Charles V directed that gold and silver items set aside as part of his cut (known as the “Royal Fifth”) be presented in the form of ingots. In 1535, as Incan treasure arrived from Peru, the order was expanded. All Mesoamerican precious metal objects entering Spain were to be melted in the royal mints at Seville, Toledo, and Segovia.

We have only the testimonies of people like Albrecht Dürer and Bernal Diaz to describe a splendor of Indigenous art that we shall never see.