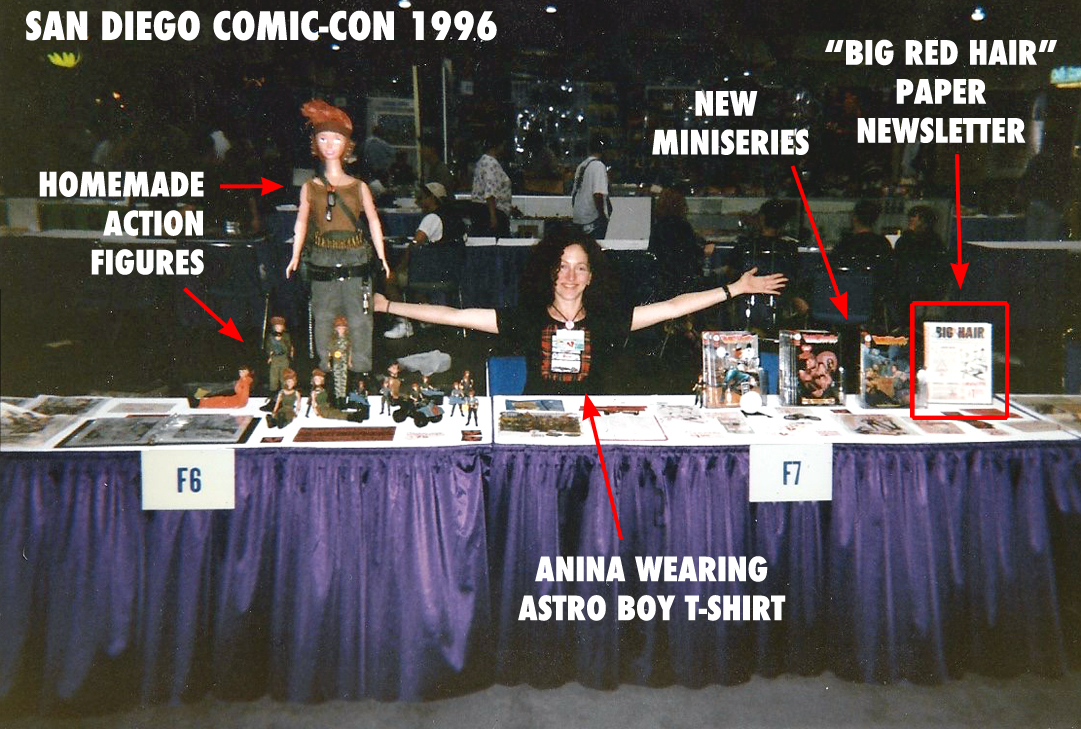 Welcome to 1998—the year Paul and I launched our website, and the same year Google was incorporated. The World Wide Web was less than 10 years old. Home broadband connections, streaming video, Wi-Fi, and mobile smartphones were future dreams.

Instead we had the exciting new 56k dial-up modem; chatrooms, email, and web access via services like CompuServe and AOL; a slew of personal websites hosted on platforms like GeoCities (some of which were preserved on ReoCities when Yahoo shut down the old service), and a smattering of corporate websites that now look charmingly primitive. People were still using phrases like “information superhighway” to describe the Internet.

Paul and I were creating comic books and had recently released our Heartbreakers miniseries through Dark Horse. We published a paper newsletter called Big Red Hair, and we were active on the 90s comic-con scene, so one’a them newfangled “Web sites” seemed like the logical next step to reach more readers.

Here’s what our first homepage and Heartbreakers page looked like in 1998: Neat-o, huh? This was made possible by the advent of drag-and-drop web authoring software, which was vastly easier than programming in HTML and more flexible than online site builders. I built the first few iterations of BigRedHair.com using the Mac-friendly program GoLive CyberStudio, learning just enough HTML to be dangerous. Then I taught Paul how to build pages—and our website exploded.

Even on that first homepage, you can see that we’d decided to post photos from our Halloween party (which became a legendary 20-year tradition, but that’s another story).

The following year, Paul created the signature Big Red Hair image that would grace our site from 1999 until 2016: 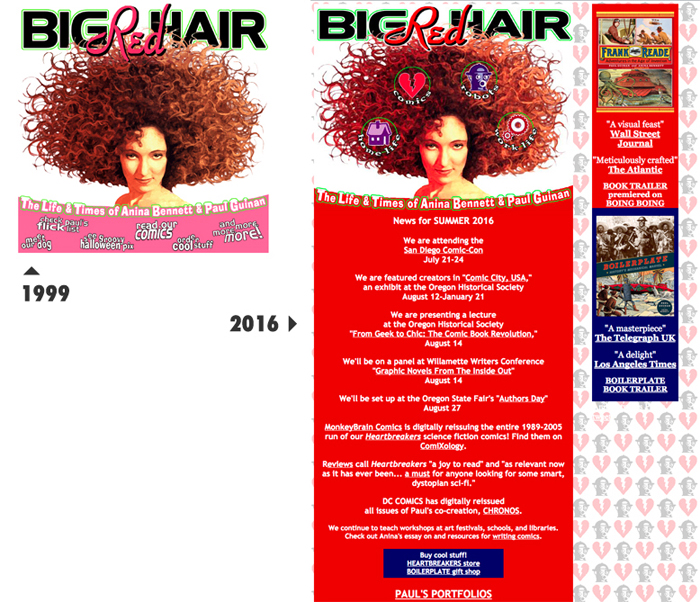 Eighteen years after we launched it, our site was a sprawling organism of more than 640 pages (I should know, I had to catalogue them) about our creative work, our travels, our dog, robots, TV shows and movies we like, our parents, that legendary party, and whatever else caught our fancy.

In some ways it became a navigational nightmare, full of strange turns and blind alleys, but that too was part of its charm. You could have fun getting lost and exploring places you hadn’t even known existed.

That, in a nutshell, is what the early web was often like. You couldn’t rely on directories and search engines to find the most interesting or relevant stuff, which is why there were so many “cool sites” lists and webrings.

You would dial up your ISP using that 56k modem, then carom from site to site in stream-of-consciousness fashion, following links until you found yourself on some dude's page devoted to a 1960s TV show about WWII, with no idea how you got there. Eventually you’d log off and go about the rest of your day IRL, without any Internet access until the next time you logged on.

If there’s one thing I miss about the early personal web, it’s that sense of unplanned journey and discovery. These days, I think most people primarily use the web to seek out specific goods, services, information, viewpoints, and relationships. We already know what we’re looking for—and so do our social media feeds and browser ads.

Our clunky old site managed to survive into the mobile era, thanks in part to its quaint narrow layouts and lack of Flash animation, until it became an historic artifact. When we finally found the opportunity to rebuild BigRedHair.com, website design had gotten so complicated that we sought professional help from our talented friends at Smith & Connors. They built the slick new site that houses this blog.

Also new and improved are:

During the design concept phase, it quickly became obvious we didn’t need to rebuild every single one of the 640+ pages from our old site. Yet I found myself reluctant to let some of those charming relics fade out of existence. And thus was the Time Tunnel born!

You can travel back to the early web anywhere you see the Time Tunnel icon on our new site, or browse around in our old pages. We’ve got dog haiku, a bouncing GIF of Paul’s head, the original Boilerplate pages that went viral back in the year 2000, comic-con photos, hundreds of amazing Halloween costumes, and much more.