Adventures in the Age of Invention

The Making of Frank Reade 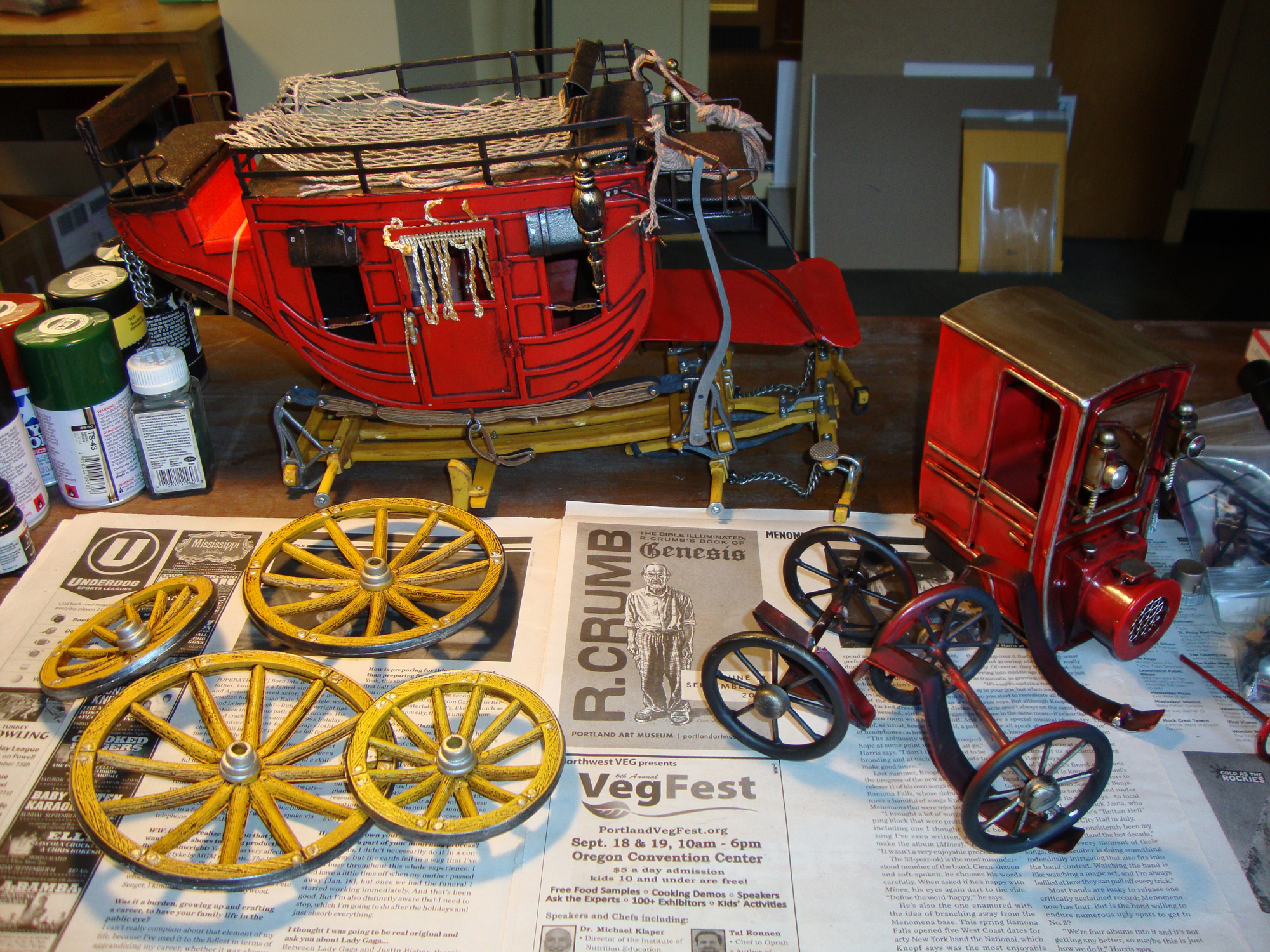 (Swipe to navigate in mobile view.) To build a model of a Frank Reade vehicle for use in our book, Paul started with large pre-assembled metal display models: a stagecoach and an 1898 Renault.

The first step was disassembling the display models. Anina’s brother, Nick, helped cut down the metal Renault. It will be used for the wheelhouse, seen in nearly all Reade vehicles, and its circular engine housing is perfect for adding a ram. 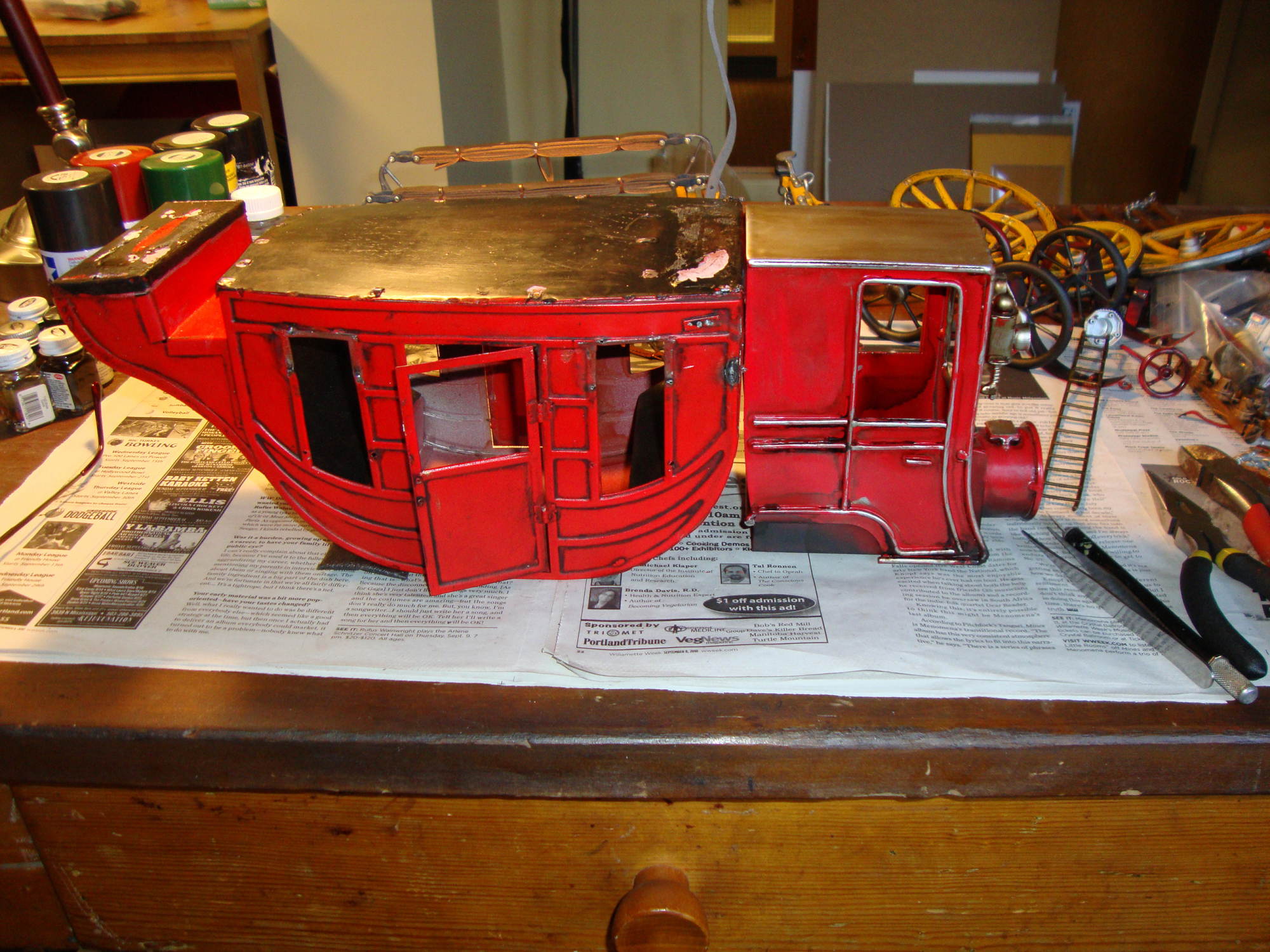 Paul, using his newfound metalworking skills, removed all surface detail from the two vehicles. Gone are railings, luggage racks, lanterns, curtains, etc. Now the Valiant can be built up from this basic hull shape. 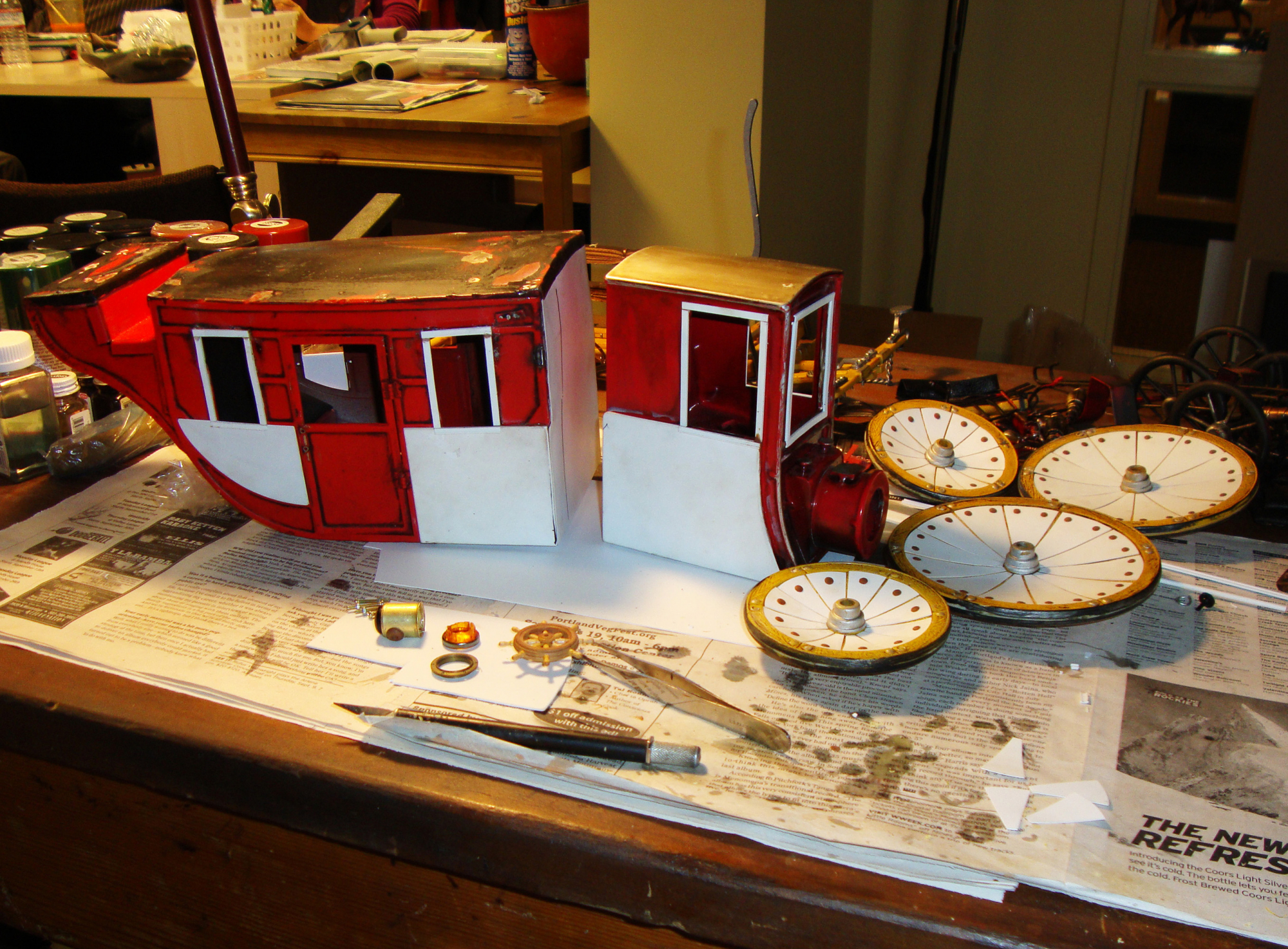 The two vehicles have different window shapes and trim. Paul addresses this discontinuity with new hull panels and window frames made from styrene. He also uses styrene to simulate metal plating on the stagecoach’s wheels, covering up the original spokes.

In the foreground are a searchlight and a steering wheel in progress. Because the Frank Reade dime novels predate automobiles, steering wheels look like ship’s wheels. 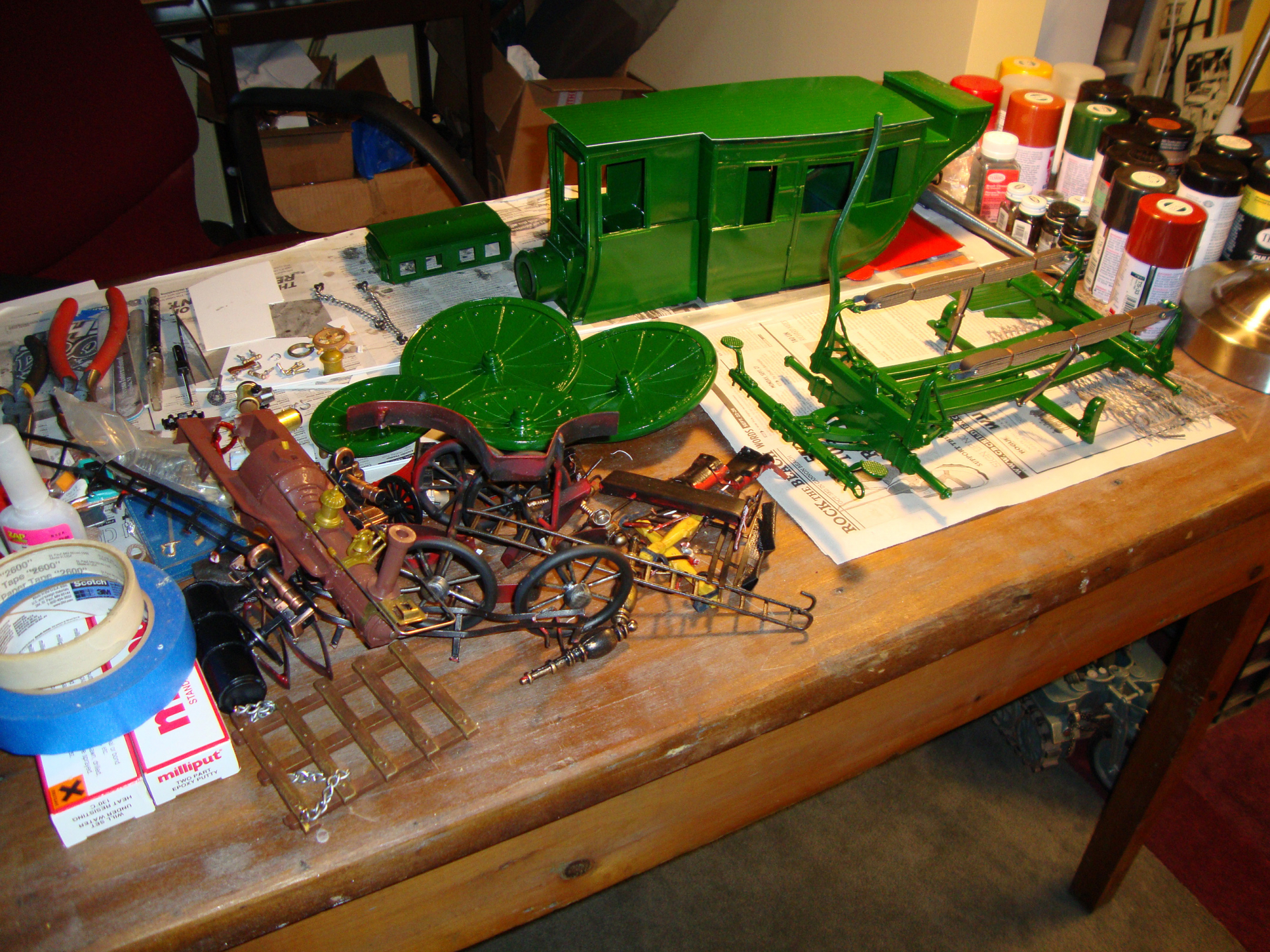 Paul fabricated a continuous roof from styrene, and a cupola from the engineer compartments of a steam train model. He painted the model green to distance it from the traditional red color of stagecoaches.

The stagecoach’s undercarriage, with its working brake system and throughbracing, is kept intact. 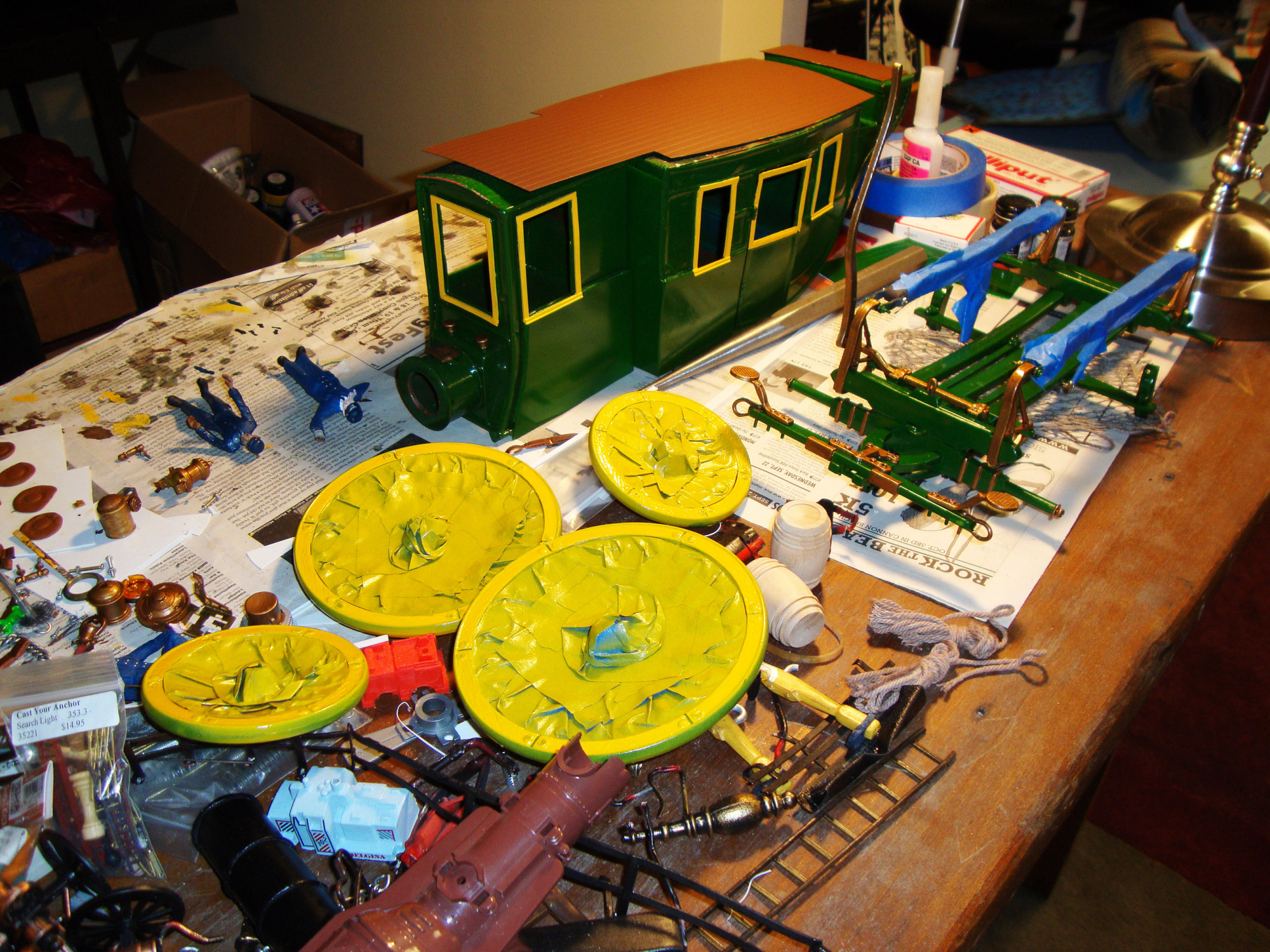 Paul painted the fittings copper, trimmed the vehicle in yellow, and painted the roof brown. Here he has started work on miniature Frank Jr. and Pomp figures. The scale of the model is roughly 1/18. 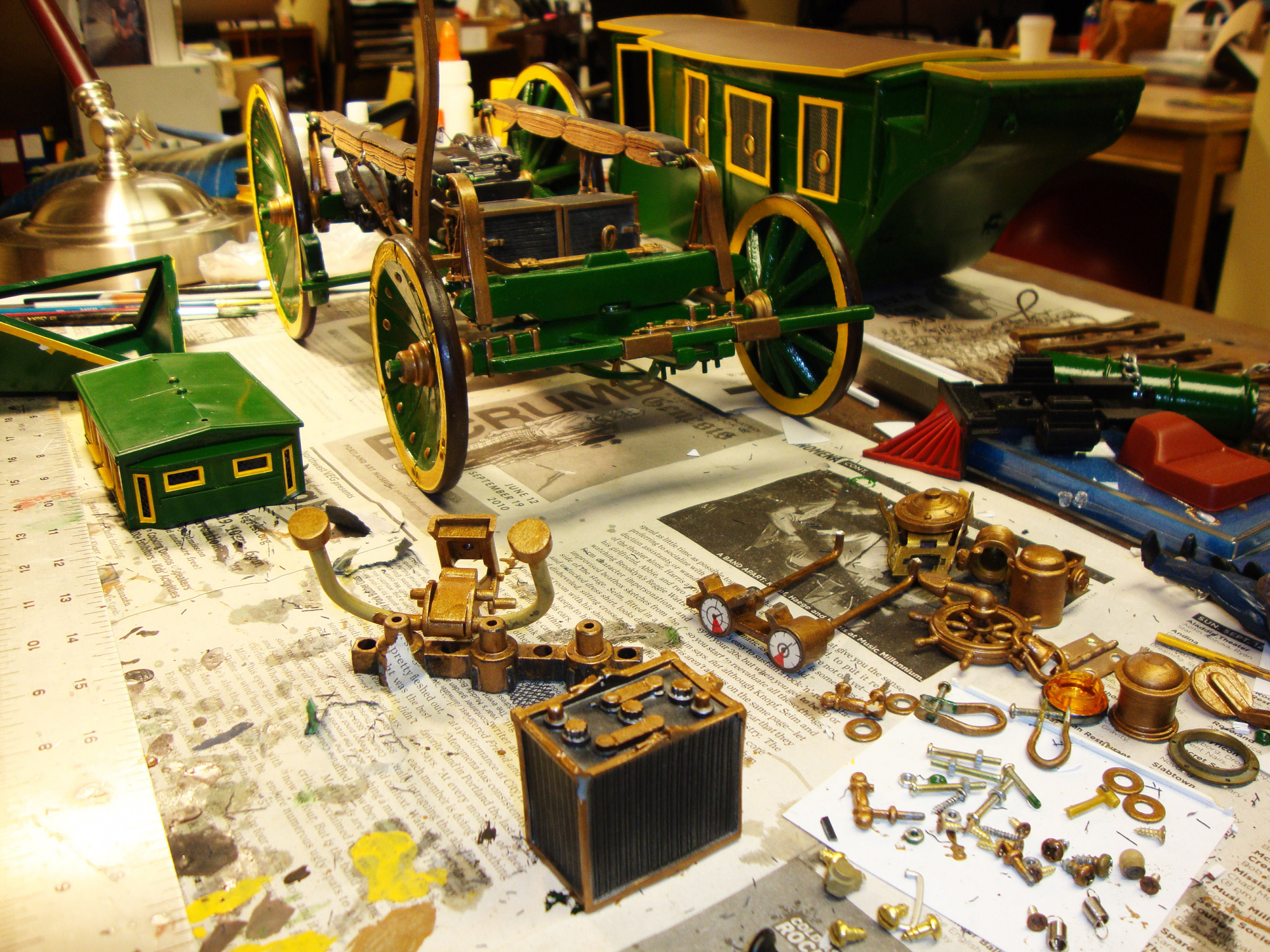 The electric motor and wheelhouse instrumentation were Paul’s favorite part of this build. He cannibalized parts from car and train models. In the foreground is a 1930s model VW battery, which will become part of an electric engine block for the Valiant. 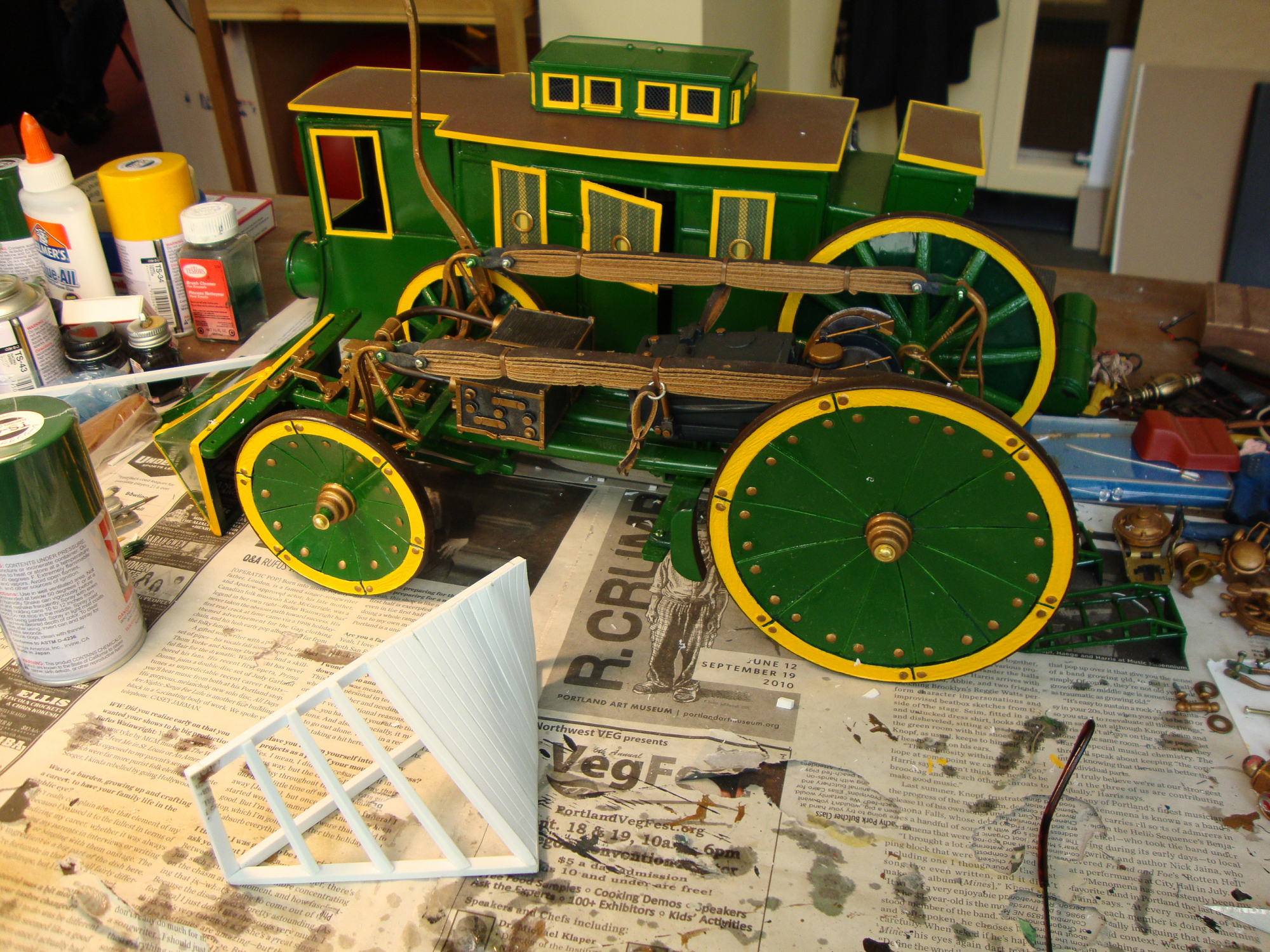 Paul has completed the Valiant’s hull, attached the cupola, and installed electric mesh windows with curtains and ring openings for rifle barrels (as described in the original dime novels).

Paul was unhappy with the geometric shape of his first cowcatcher, which he made from styrene. This photo shows his second version in progress, also made of styrene, but with a curved plank-on-frame design that’s much more time consuming. 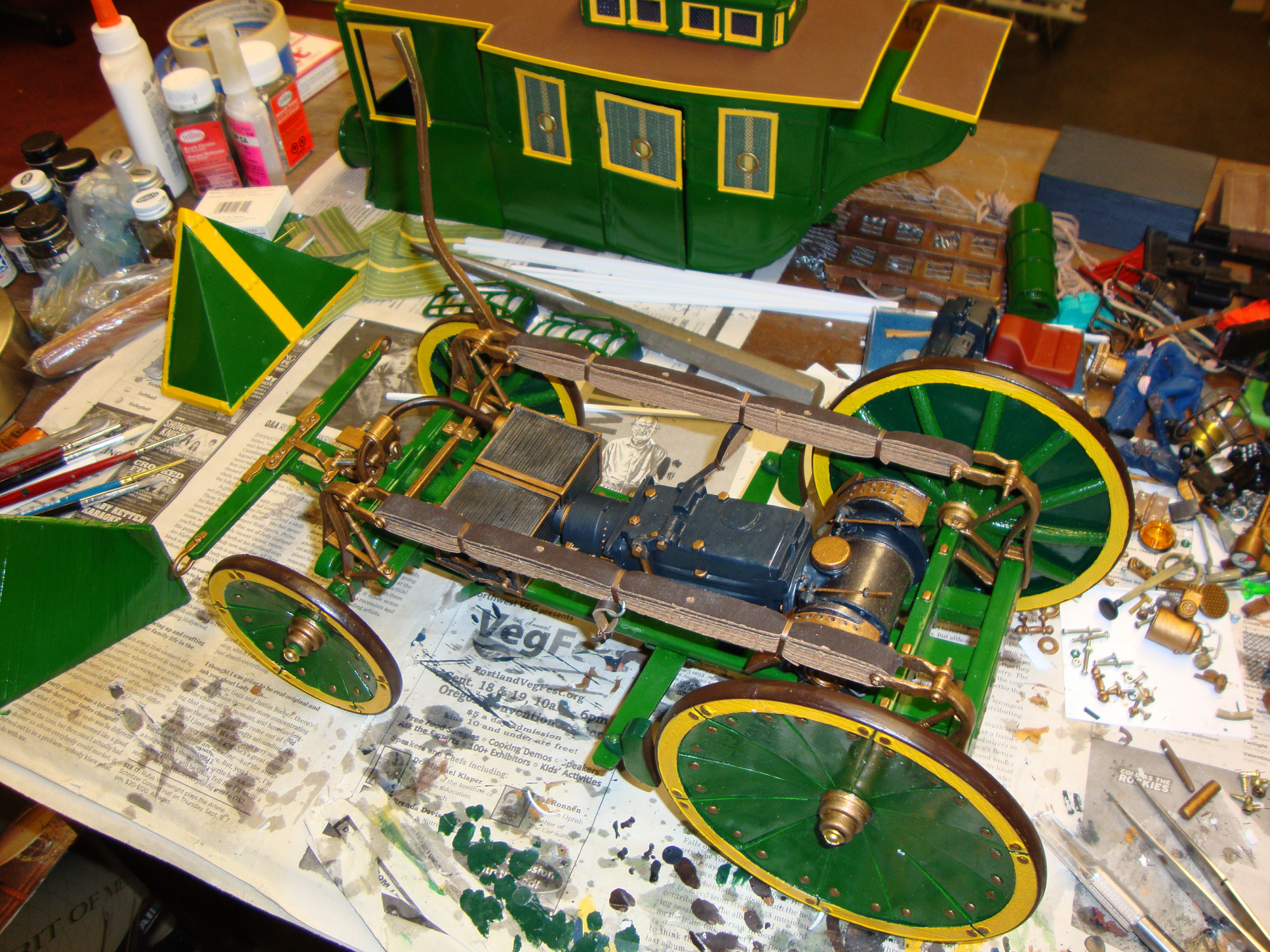 A view of the installed electric engine, with a few details yet to be added. The original brake handle for the stagecoach hasn’t been cut down, and the luggage rack still needs to be attached to the hull.

A large, metal punch tool will sit in the circular opening of what was formerly the Renault’s engine housing. This will be Frank Jr.’s famed vehicle ram. The metal punch has a blunted tip, so Paul uses Photoshop to sharpen it up for images in our book.

The rejected cowcatcher can be seen at upper left. 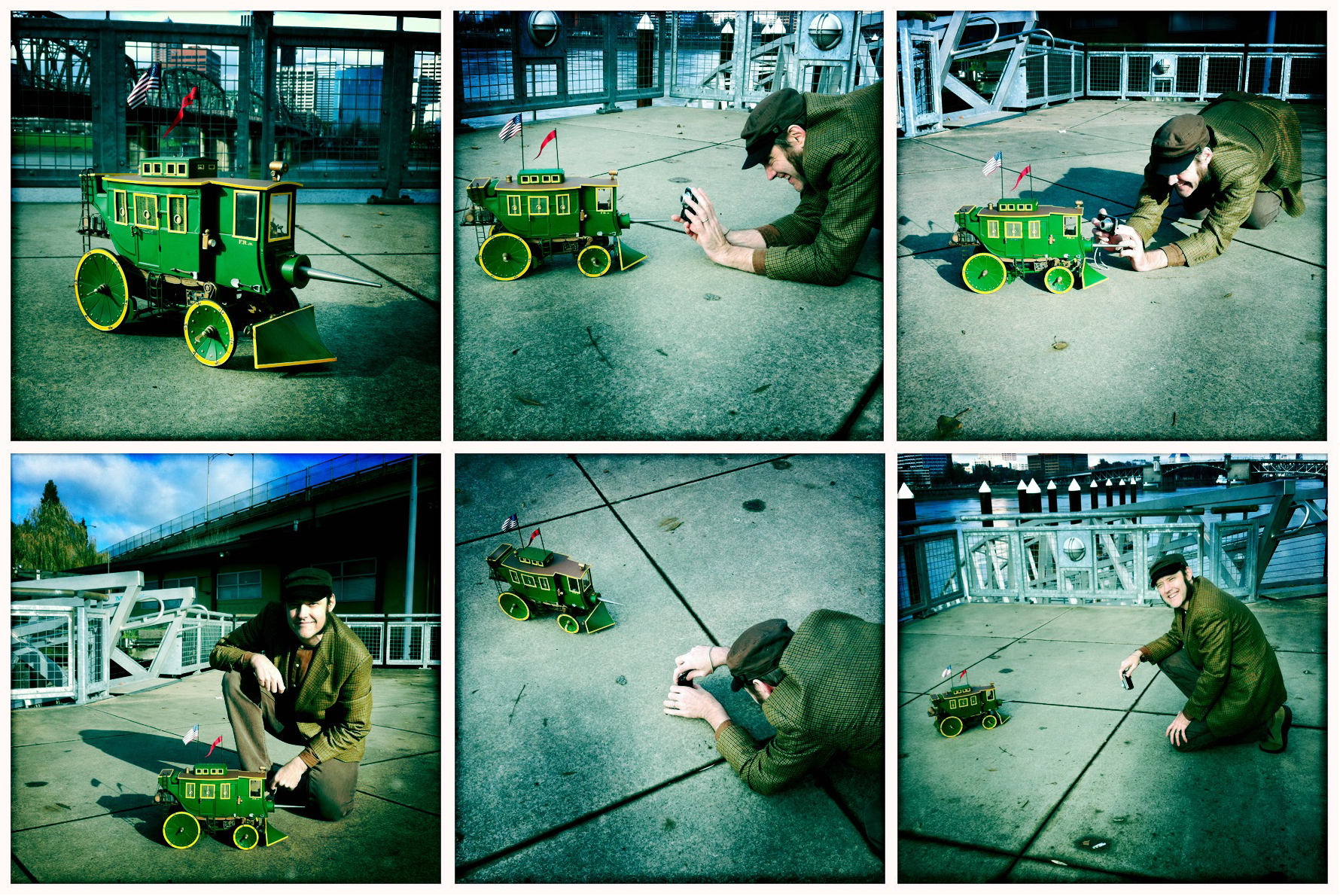 His model complete, Paul gets down and dirty to get just the right photo angle and lighting. He’ll use shots of the model Valiant to digitally create convincing photos of a full-size vehicle in real environments. 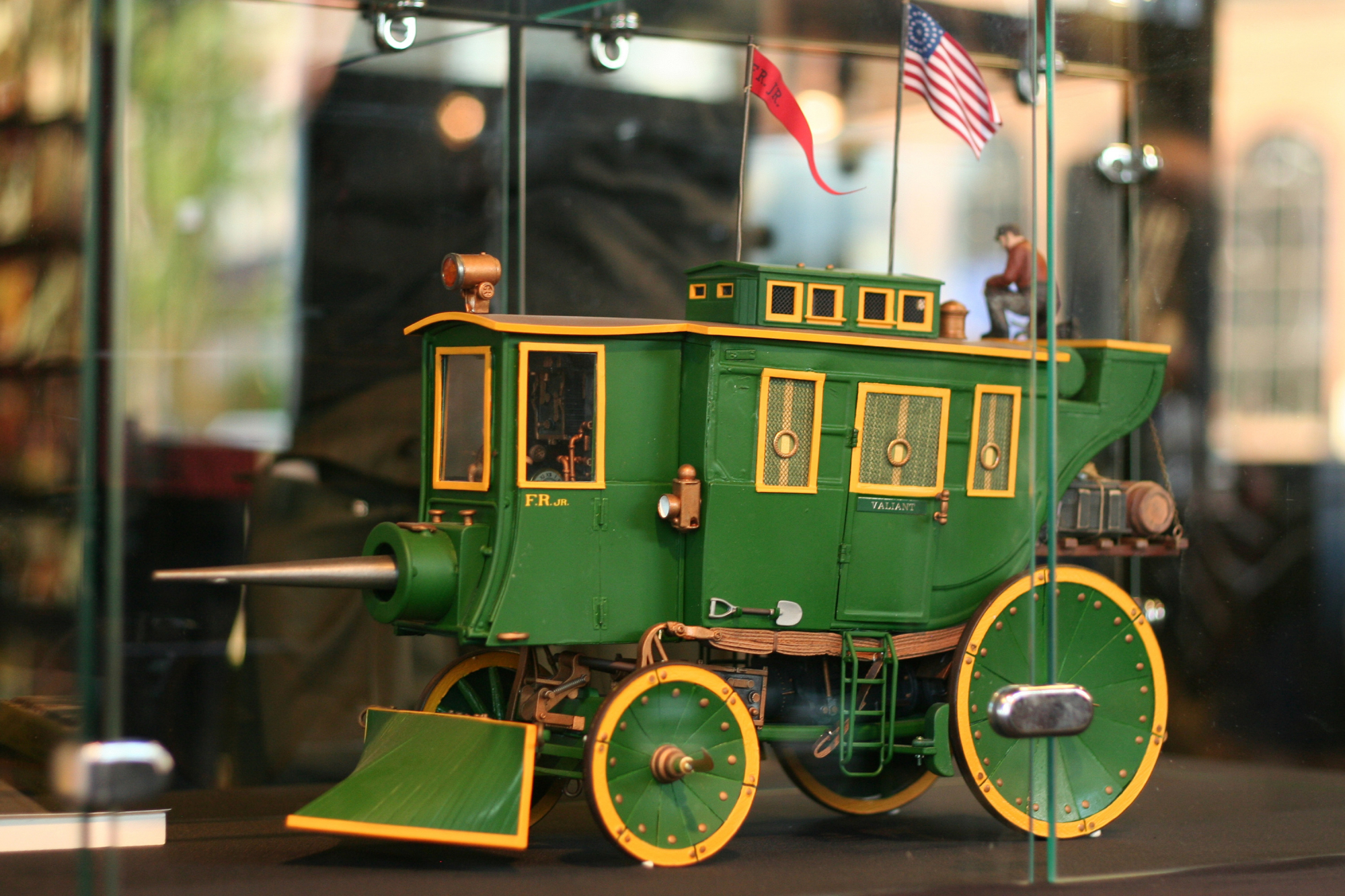 The Valiant on display at an art exhibit. A miniature Frank Reade is posed on the roof of the battlewagon. 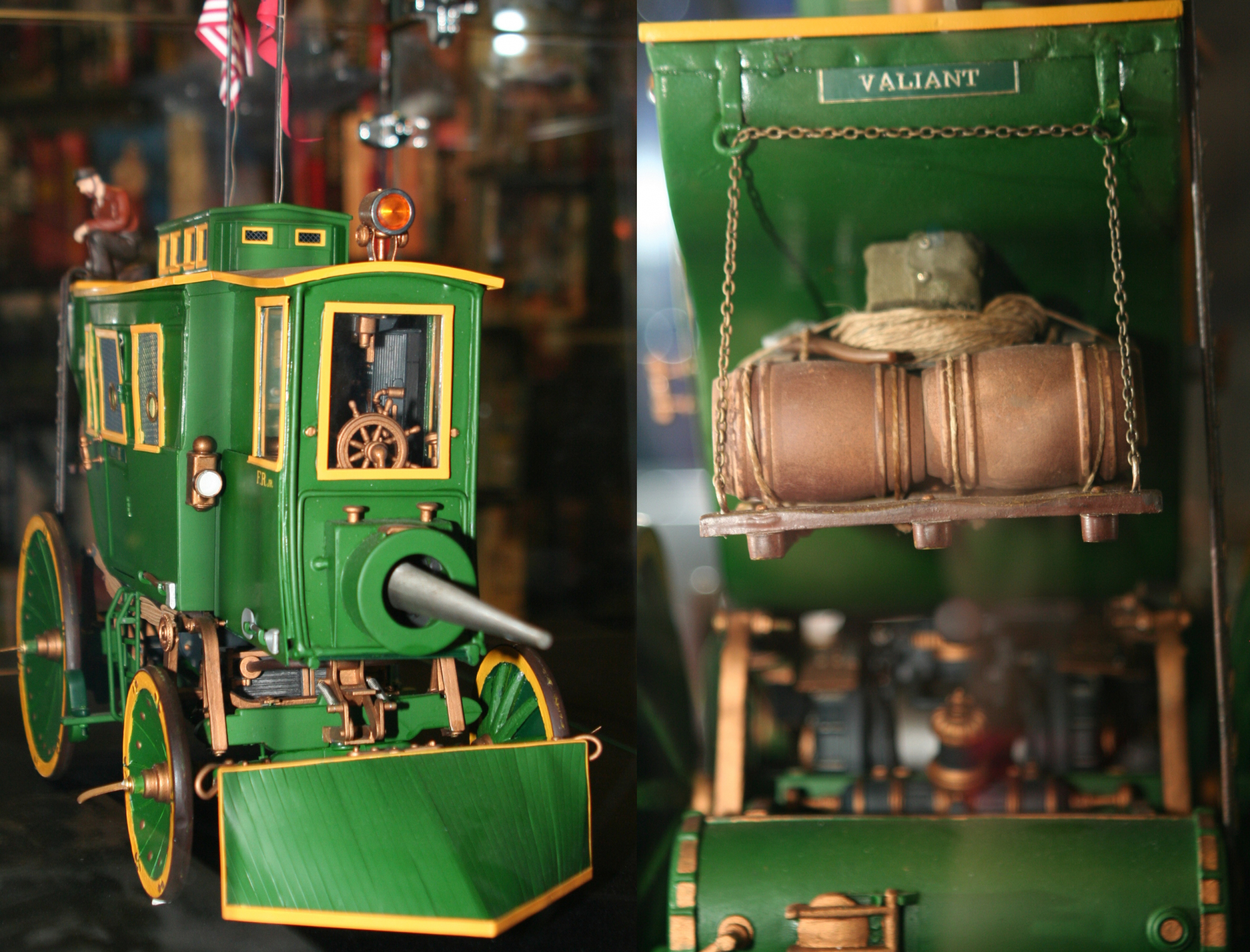 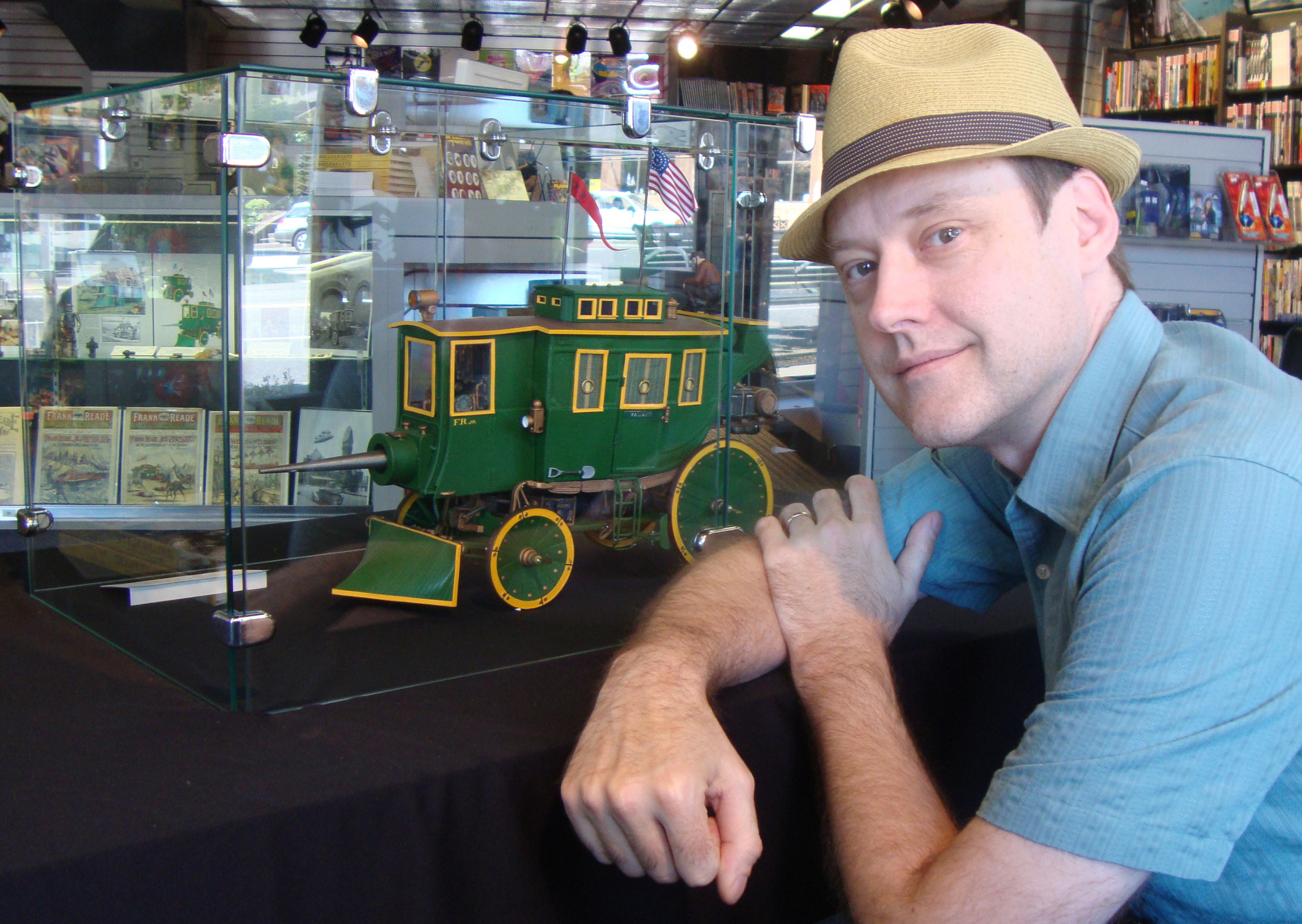 Paul with his Valiant model, on display for an art exhibit at Things From Another World, a comic book store. 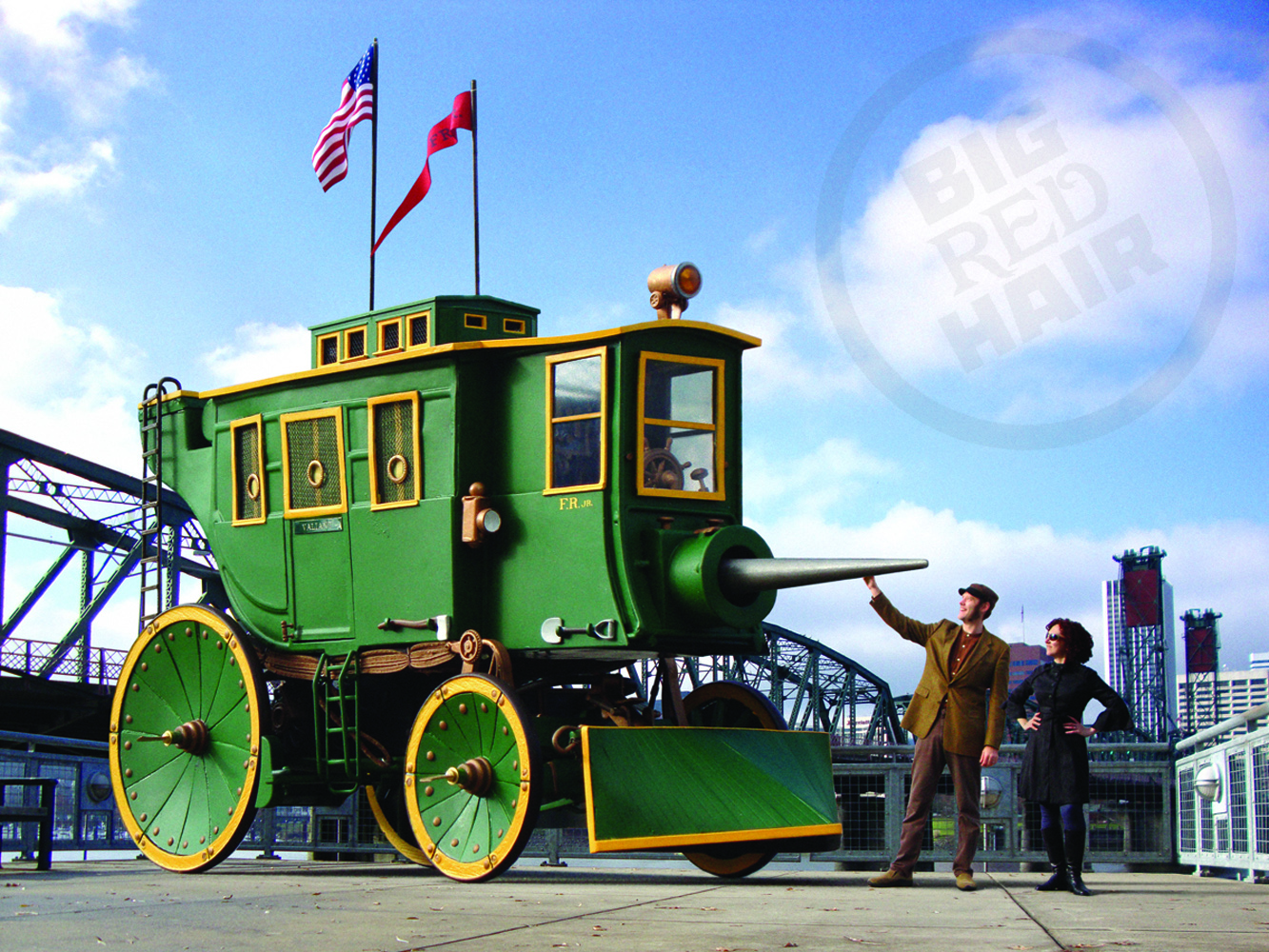 The end result of our photo shoot down by the river: Anina and Paul with a “life-size” version of the Valiant. This image appears in the last chapter of Frank Reade: Adventures in the Age of Invention. 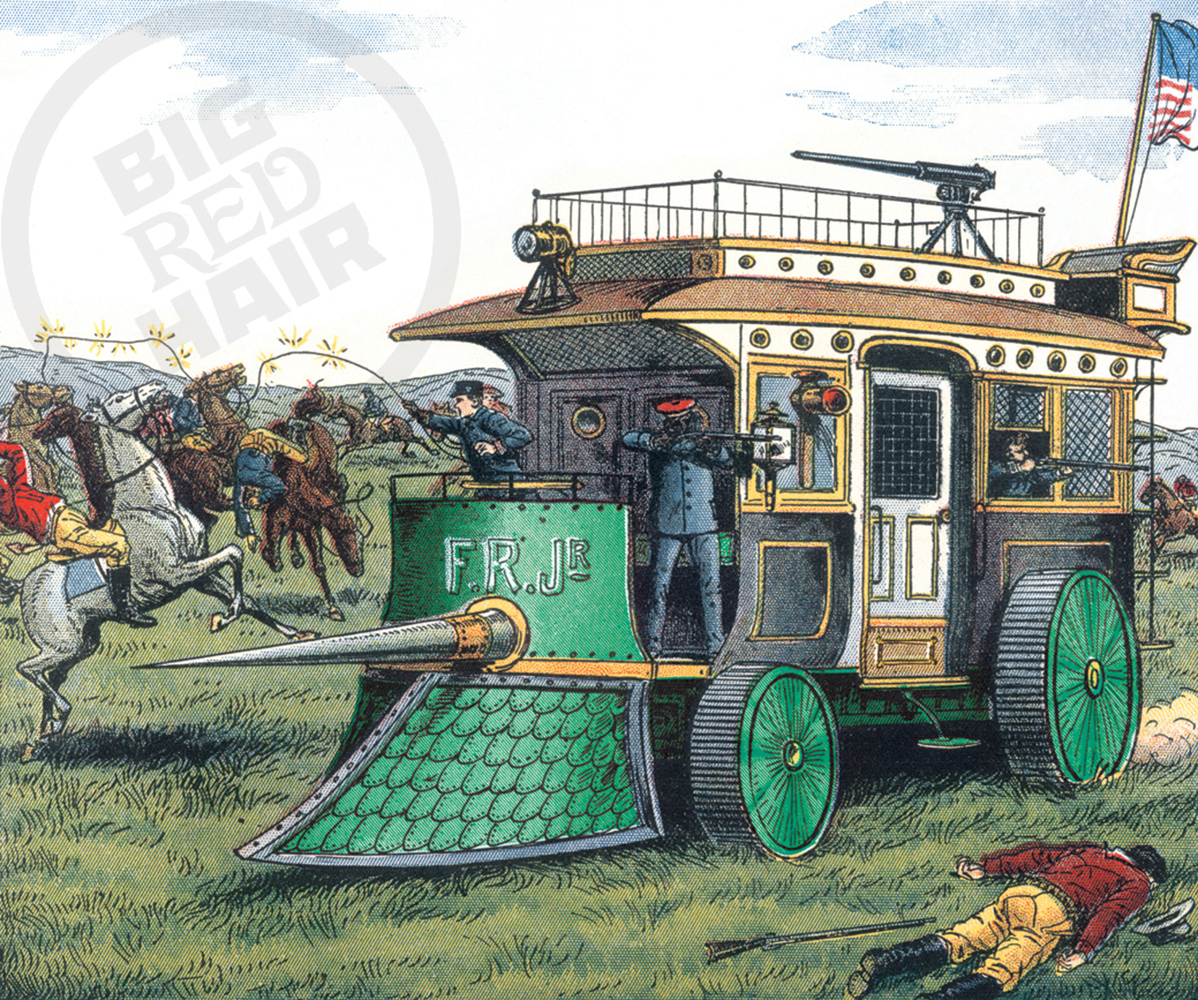 A 19th-century dime novel illustration of Frank Reade Jr.’s vehicle the Valiant, one of the inspirations for Paul’s real-life model. 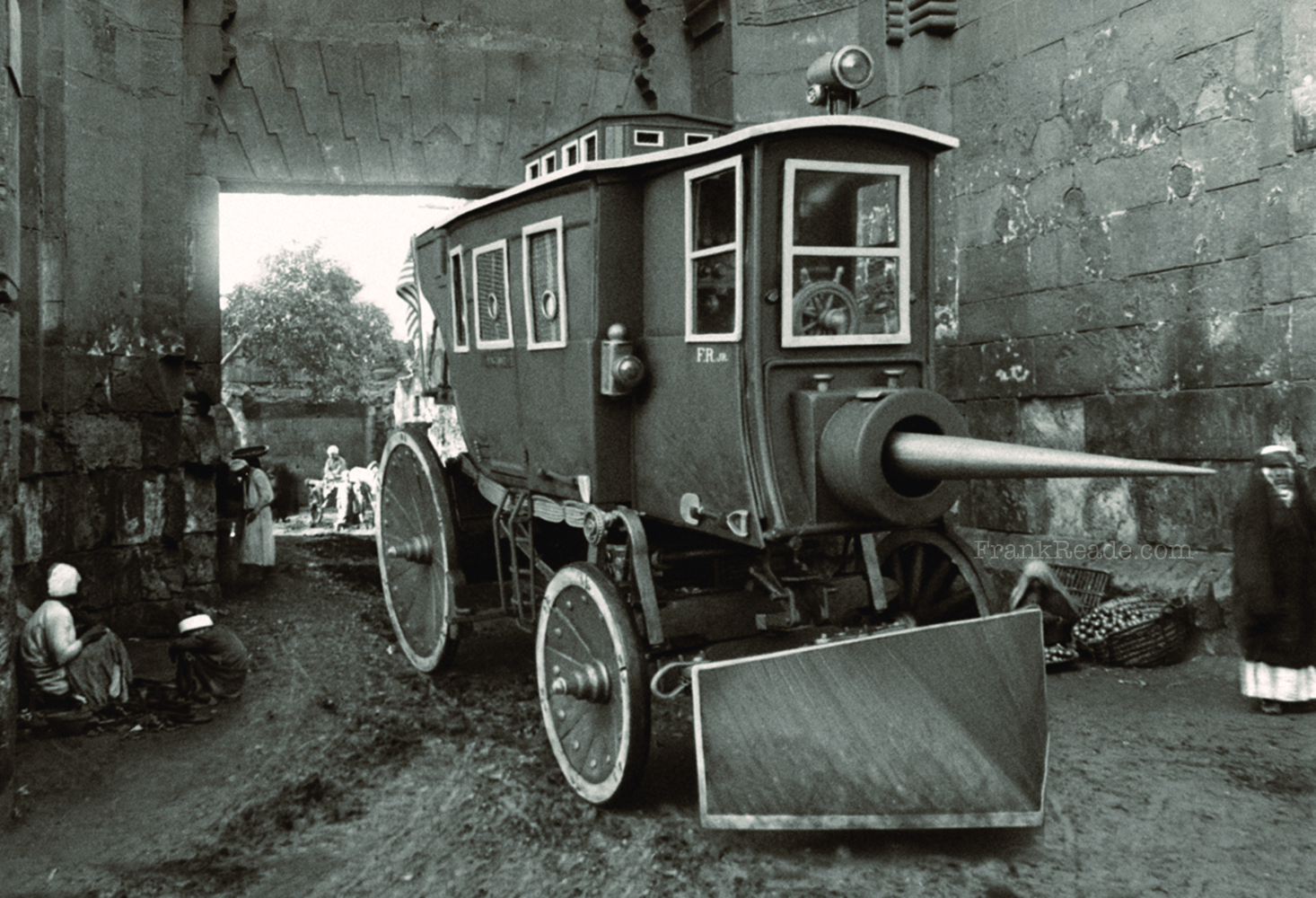 An image of the “real” Valiant from our book, during a Frank Reade Jr. adventure in Egypt. Model, model photography, and Photoshop work by Paul Guinan. 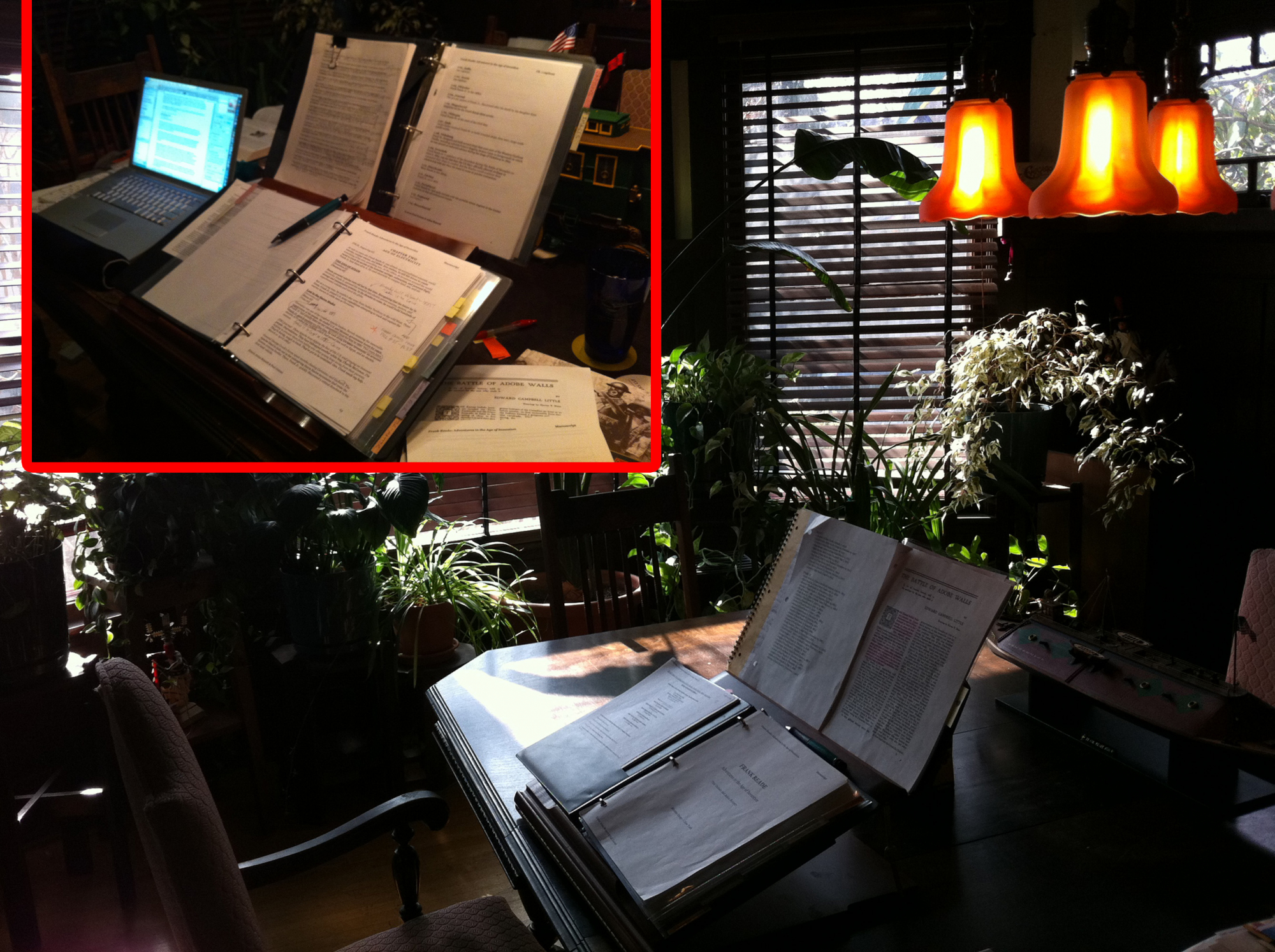 Anina wrote most of Frank Reade: Adventures in the Age of Invention in our dining room. These images show her multimodal setup for research, writing, and editing. A draft manuscript is in one binder, image list with captions in another binder, plus a printout of excerpts from the 19th-century Frank Reade dime novels and various reference articles. Anina also kept our Boilerplate book handy so she could cross-reference key dates, since the characters appear in each other’s books.