Adventures in the Age of Invention 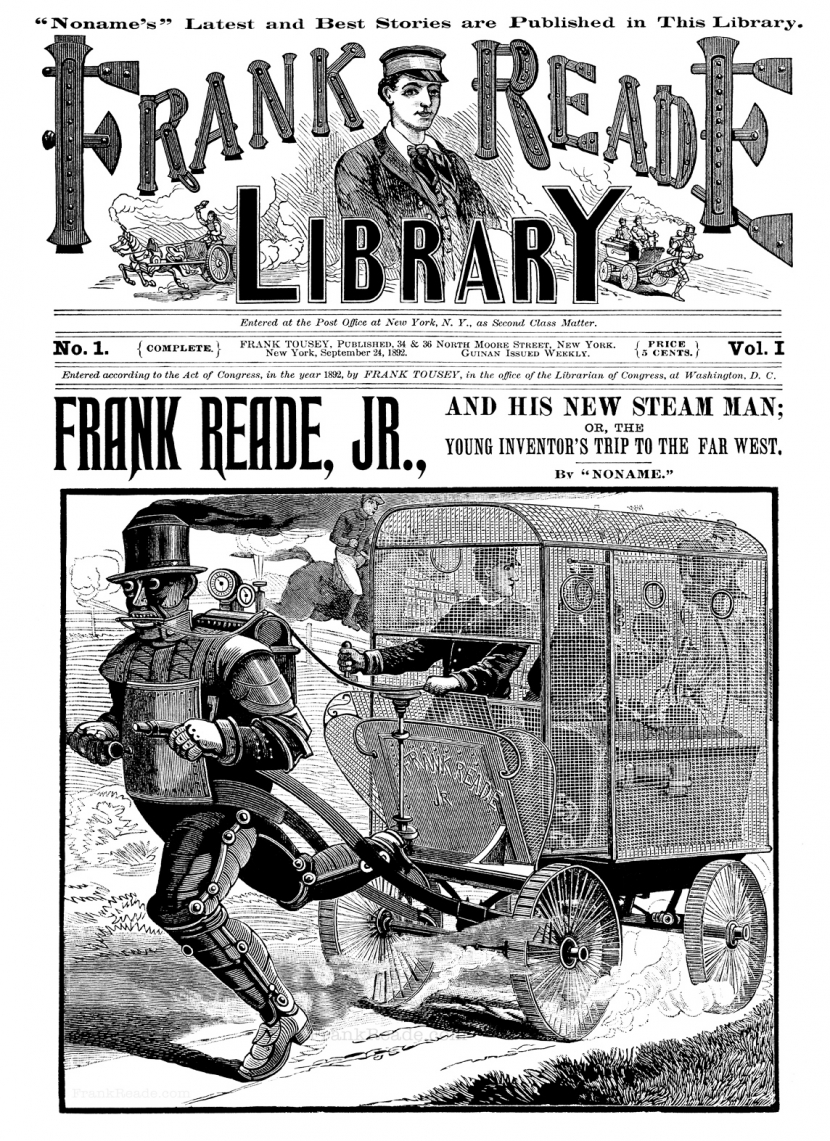 We didn’t make up the Frank Reade dime novels. They truly exist, and they helped lay the groundwork for modern science fiction.

They began with the story “Frank Reade and His Steam Man of the Plains, or, The Terror of the West.” Written by Harold Cohen under the pen name Harry Enton, as a knockoff of an earlier steam man story, it was serialized in Boys of New York magazine in 1876. That version of Frank Reade, who invented robots powered by steam, appeared in four serial stories. He then became Frank Reade Sr. (“suddenly middle-aged,” as Jess Nevins put it) and was supplanted by his brash young son, Frank Jr.

The teenaged inventor-hero Frank Reade Jr. was wildly popular, starring in at least 179 violent “blood and thunder” adventures aimed at boys. After improving on his dad’s steam-driven inventions, Frank Jr. turned to electricity—the motive power of the future! He built electric-powered robots, submarines, ATVs, and helicopter airships, all heavily armed and armored. He had adventures around the world, even accidentally venturing into outer space.

There’s little consistent continuity between stories: Sometimes Frank Jr. has a wife, more often he doesn’t; the location of Readestown varies; and he rarely deploys the same vehicle more than once. In only one story does Frank Jr. have a son, Frank Reade III, and a daughter, Kate, whose names we used in our own book.

More consistent in the dime novels are Frank Jr.’s assistants, Pomp and Barney, who are played for laughs as broad ethnic stereotypes. In the text excerpts reprinted in our book, we toned down the spelling of Pomp’s and Barney’s dialects to make them more readable for today’s audience.

The dime novel stories, published under the pseudonym Noname (but mostly written by Luis Senarens), were reprinted for decades in Frank Reade Library, Frank Reade Weekly, and other periodicals. They were read by millions of people and made an indelible impact on the earliest generations of science fiction readers, writers, and editors. Jess Nevins wrote about Frank Reade, among many other characters, in his Encyclopedia Fantastica Victoriana. You can see the original article preserved on Reocities.

The University of South Florida Libraries has an excellent online collection of dime novels, including Frank Reade Library and Frank Reade Weekly. (Be forewarned: many of the stories contain 19th-century racial stereotypes and other elements that may be considered offensive today.)

Like many stories before and after them, blood-and-thunder dime novels were decried as corrupting young readers. But by 1922, when the New York Public Library staged an exhibit of dime novel covers, they were already considered quaint relics of a bygone era. Frank Reade Jr., as presented in the dime novels, is an unabashed imperialist with a 19th-century sense of American manifest destiny. Our book Frank Reade: Adventures in the Age of Invention is, in part, a 21st-century look back at him from a different perspective. For a totally nerdy, in-depth analysis of the original dime novel stories and how they relate to American history, see “Frank Reade, Jr., in Cuba: Dime-Novel Technology, U.S. Imperialism, and the ‘American Jules Verne,’” by Nathaniel Williams, in American Literature Vol. 83, No. 2 (Duke University Press 2011).